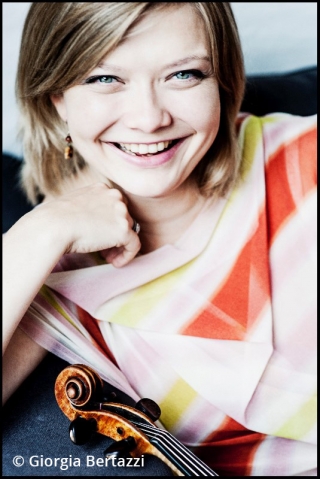 Performing music from baroque to new commissions on both modern and period instruments, Alina Ibragimova has established a reputation as one of the most accomplished and intriguing violinists of her generation. This is illustrated by her prominent presence at the BBC Proms since 2015: aside from concerto performances from the standard repertoire, her Proms appearances have included a concert with a baroque ensemble and two late-night Royal Albert Hall recitals featuring the complete Bach partitas and sonatas, for which The Guardian commented “The immediacy and honesty of Ibragimova’s playing has the curious ability to collapse any sense of distance between performer and listener”. In the 2018 Proms, Alina gave the World Premiere of the Rolf Wallin Violin Concerto with the Bergen Philharmonic Orchestra, conducted by Edward Gardner. 18/19 saw a strong focus on Shostakovich Concerto’s No. 1 and No. 2, which she performed and recorded with Vladimir Jurowski and the State Academic Symphony Orchestra of Russia.

Over the next season, Alina looks forward to debut engagements with the Pittsburgh Symphony, Vancouver Symphony andBarcelona Symphony Orchestras and will return to the London Symphony Orchestra (Stutzmann) and Rundfunk-Sinfonieorchester Berlin (Jurowski). She will tour in a play-direct capacity with the Sinfonietta Riga, Ensemble Resonanz and the Orchestra of the Age of Enlightenment with whom she will also record the three Violin Concertos by Michael Haydn for Hyperion Records.

Her long-standing duo partnership with pianist Cédric Tiberghien has featured highly successful cycles of the Beethoven and Mozart violin sonatas at the Wigmore Hall. Highlights among recent engagements included a three-week tour of Japan and Korea, extensive touring of North America and a Berlin debut recital at the Pierre Boulez Saal. Highlights in their forthcoming season include appearances at the Pierre Boulez Saal (Berlin), Beethovenhaus Bonn and the Wigmore Hall, as well as extensive touring with the Doric String Quartet (Konzerthaus Vienna, Elbphilharmonie Hamburg, Muziekgebouw Amsterdam, Hiedelberg Frühling Festival and the Wigmore Hall).

Alina is a founding member of the Chiaroscuro Quartet. Together they have toured and recorded extensively since 2005 and have become one of the most sought-after period ensembles.

Alina’s discography on Hyperion Records includes 16 albums ranging from Bach to Szymanowski and Ysaye. Her latest release featuring Vierne and Franck Violin Sonatas & Ysaÿe’s Poème élégiaque with Cedric Tiberghien was referred to as

“…Simply superb in every way…” by BBC Music Magazine. An album featuring the three Brahms Violin Sonatas will be released in October 2019.

Born in Russia in 1985 Alina studied at the Moscow Gnesin School before moving with her family to the UK in 1995 where she studied at the Yehudi Menuhin School and Royal College of Music. She was also a member of the Kronberg Academy Masters programme. Alina's teachers have included Natasha Boyarsky, Gordan Nikolitch and Christian Tetzlaff. Alina has been the recipient of awards including the Royal Philharmonic Society Young Artist Award 2010, the Borletti-Buitoni Trust Award 2008, the Classical BRIT Young Performer of the Year Award 2009 and was a member of the BBC New Generation Artists Scheme 2005-7. She was made an MBE in the 2016 New Year Honours List. Alina records for Hyperion Records and performs on a c.1775 Anselmo Bellosio violin kindly provided by Georg von Opel.