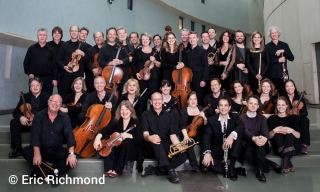 Acknowledged as “the finest chamber orchestra in the world” (BBC 2 Television), the Chamber Orchestra of Europe was founded in 1981 by a group of young musicians graduating from the European Union Youth Orchestra. It was their ambition to continue working together at the highest possible professional level, and of that original group, thirteen remain in the current core membership of around sixty.

The members of the COE, selected by the Orchestra itself, pursue parallel careers as international soloists, Leaders and Principals of nationally-based orchestras, as members of eminent chamber groups, and as tutors and professors of music. It is their wealth of cultural backgrounds and shared love of music-making which remain at the heart of their inspired performances.

The COE performs in some of the most prominent cultural venues in Europe including the Philharmonie in Paris, the Concertgebouw in Amsterdam, the Baden-Baden Festspielhaus, the Cologne Philharmonie and the Alte Oper in Frankfurt. Together with other major European concert halls, these venues provide a regular touring base for the Orchestra. The COE has a close association with the Lucerne Festival, the Styriarte in Graz and with many of the world’s most prestigious musical events, such as the BBC Proms in London, the Edinburgh International Festival and the Mostly Mozart Festival in New York.

In only thirty-five years, the Chamber Orchestra of Europe has recorded over 250 works with all the major recording companies. It has won numerous international prizes for its recordings including three Gramophone Record of the Year awards - for Rossini’s opera Viaggio à Reims, Schubert’s symphonies conducted by Claudio Abbado, and Beethoven’s symphonies conducted by Nikolaus Harnoncourt. The Orchestra has also won two Grammys and the MIDEM “Classical Download” Award. The COE was the first Orchestra to create its own label, “COE Records”, in association with Sanctuary Records, a division of Universal Music. Recent CDs released by the Orchestra include Mozart’s Clarinet Concerto and Quintet with the COE’s principal clarinet Romain Guyot for the label Mirare and Mozart’s Cosi Fan Tutte with Yannick Nézet-Séguin, Rolando Villazon, Mojca Erdmann, Miah Persson, Angela Brower, Adam Plachetka, Alessandro Corbelli, recorded for Deutsche Grammophon and released in 2013.

In recent years, the COE has released a number of DVDs and in particular has developed a close association with producing companies Idéale Audience and Styriarte/ORF. Idéale Audience produced two DVDs of concerts performed at the Cité de la musique in Paris, namely Ravel’s Piano Concerto in G, R. Strauss’s Metamorphosen and Bourgeois Gentilhomme Suite conducted by Vladimir Jurowski with Hélène Grimaud and Sibelius’s Rakastava, Valse Triste and Violin Concerto and Schumann’s Symphony No. 1 conducted by Vladimir Ashkenazy with Ukrainian violinist Valeriy Sokolov. Further DVD releases with Idéale Audience include Beethoven’s Missa Solemnis with John Nelson and the Gulbenkian Choir, filmed at Lisbon’s Gulbenkian Foundation in 2010. The Styriarte, in association with the ORF (Austria’s Radio and Television network), released three DVDs of the COE’s performances at the Styriarte Festival, Beethoven’s Mass in C and Symphony No. 5 (2007) and Smetana’s Má Vlast (2010) and The Bartered Bride (2011). All of the COE’s recordings can be purchased on Amazon or downloaded from iTunes and Spotify.

To enable young people and new audiences to experience at first hand high quality live orchestral and chamber music, the COE has an active education and outreach programme designed for school, conservatoire and concert hall. The COE Academy was created in 2009 and each year awards full scholarships to exceptionally talented postgraduate students and young professionals to study with the COE’s principal players when the Orchestra is ‘on tour’.

The COE receives invaluable financial support from a number of Friends including particularly The Gatsby Charitable Foundation and The Underwood Trust, without which it could not survive. The Principal Oboe Chair is supported by the Rupert Hughes Will Trust in memory of the late Rupert Hughes.