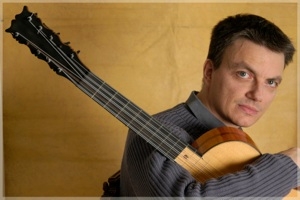 Christian Rivet studied guitar, conducting, chamber music, harmony and counterpoint at the Conservatoire National de Region in Metz. During this period he had several lessons with the lutenist Hopkinson Smith who provided him with the key to an approach to music that is at once personal yet respectful of the composer's style.

Since that time he has honed his musical philosophy with the aid of both period and modern instruments. Having won top prizes at Metz, he began studying with Alexandre Lagoya at the Conservatoire National Supérieur de Musique de Paris in 1984. After obtaining Premiers Prix in guitar and chamber music (1987 and 1988), he was accepted to do a postgraduate where he received guidance from the Uruguayan guitarist Alvaro Pierri and the flautists Michel Debost and Aurèle Nicolet, which was central to his development.

Having gained extensive experience from key encounters in his career (with artists such as Léonard Bernstein, Pierre Boulez, Peter Eôtvos, Pascal Dusapin, Jean-Paul Roussillon and Jean Echenoz), concerts at leading festivals worldwide as a soloist and alongside partners such as Emmanuel Pahud, the Sine Nomine Quartet, Michel Portal and Laurent Korcia, and his 'original' perception of the world, Christian Rivet continues to nourish his passion for creating different colours in sound and studies music and literature with equal interest. In 1985, he was awarded First Prize for his poetry at the international competition organized by the city of Toulouse; he was subsequently engaged by the radio station France Culture, and regularly composes original music for the theater, notably for the Avignon Festival.

A prize winner at several international competitions, he is also a qualified teacher of guitar (holding the Certificat d'Aptitude; top candidate in his discipline) and is entrusted by the French Ministry of Culture with preparing candidates for national examinations leading to teaching posts. He also participates in international master-classes, teaches chamber music and guitar at conservatoires in Paris and is Director of the Le Vent sur l'Arbre Festival.

His recordings have also received critical acclaim; he brought together the composers Robert de Visée (Baroque guitar) and André Jolivet (modem guitar) for a CD released by Zig-Zag Territoires which won awards in the press including 10 de Classica-Répertoire. His last record 24 Ways upon the Bells (John Dowland, Benjamin Britten, John Playford and The Beatles) released by Naïve was hailed as the best recording of the year by the newspaper Le Monde.

Highlights of his 2013/14 season include solo recitals on the lute at the Konzerthaus (Vienna), tours in Switzerland, Germany and Japan with the flautist Emmanuel Pahud (they will record a CD together next spring for EMI), and collaborations with several composers (including Philippe Hersant and Brice Pauset) with the aim of expanding the guitar and lute repertoire. Christian Rivet will also focus on musical composition this year, dedicating several pieces to Mariana Flores, Soprano and Hopkinson Smith, lute. He is currently completing a duo for flute and guitar which will be published by Editions Durand.

He will resume his conducting with the creation of an orchestra at the request and with the help of the French Ministry of Culture. He will make several concerts centred around Stravinsky’s work.