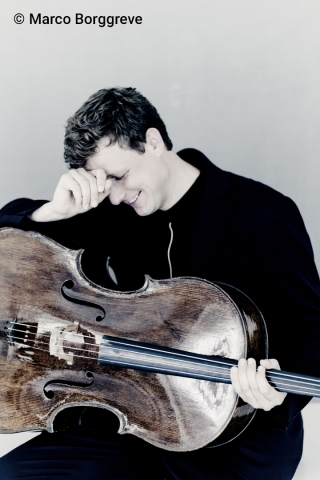 “His playing was commendable for its fluidity and virtuosity, distinguished by both a fleet-fingered lightness and a rich timbre” (Vivien Schweitzer, The New York Times)

István Várdai is highly regarded for his joyous energy, rhythmic vigour and elegant grace in his soulful renditions of solo, chamber music and orchestral repertoires for cello. As Artistic Director of Franz Liszt Chamber Orchestra since 2020, István presents inspiring and creative programmes. Alongside this, István welcomes world-renowned musicians at the Kapostfest Chamber Music Festival in Hungary, which he co-curates with violinist Kristóf Baráti, and continues his soloist career with leading orchestras performing repertoire from Bach to Saariaho.

Past seasons’ highlights include engagements with Helsinki Philharmonic with Susanna Mälkki, Hungarian National Philharmonic Orchestra with Hannu Lintu,BBC Philharmonic Orchestra with Douglas Boyd, Vancouver Symphony Orchestra with Jun Maerkl, Orchestre National du Capitole de Toulouse with Klaus Mäkelä and many others. In chamber recitals, he has performed with András Schiff, Yuri Bashmet, Gidon Kremer, Jean-Efflam Bavouzet, Mischa Maisky and Víkingur Olafsson in some of the world’s leading venues such as London’s Wigmore Hall, and Vienna’s Musikverein.

Over the years, István Várdai’s has recorded Janáček, Prokofiev and Elgar’s cello concertos on Ysaÿe Records, pieces by Mendelssohn, Martinů, Paganini, Beethoven and Popper on Hännsler label, Tchaikovsky’s Rococo Variations in both versions and Bach’s solo cello suites on Brilliant Classics, Singing Cello and Dancing Cello on Hungaroton label that features famous encores and a compilation of popular cello pieces of the 19th and 20th centuries.

Following success on the competitions circuit, including first prizes at the 2014 ARD International Music Competition and at the 2008 Geneva International Music Competition, István Várdai served on the jury of the International Tchaikovsky Competition in 2019. He has been teaching at Vienna University of Music and Performing Arts where he succeeded the late Heinrich Schiff in the role, and where he himself studied in 2005. István Várdai plays on ‘Ex du Pré-Harrell’ Stradivari made in 1673, previously played by Jacqueline du Pré.