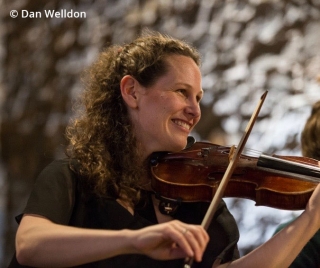 In 2008, Malin Broman was appointed Concert Master of the Swedish Radio Orchestra. Since taking up her position in Stockholm, she has been invited as Guest Leader by such orchestras as the London Symphony Orchestra, Chamber Orchestra of Europe, Mahler Chamber Orchestra and Philharmonia Orchestra, London.

In September 2015 Malin took up the post as Artistic Director for Musica Vitae Chamber Orchestra, a contract currently running until 2020. From 2019 she will also be Artistic Director for the Ostrobothnian Chamber Orchestra, Finland succeeding Sakari Oramo. She recently directed the Swedish Radio Choir and the Swedish Radio Symphony Orchestra in an all Haydn programme - the first time that the two ensembles have worked together without conductor. Up-coming projects include debuts with Tapiola Sinfonietta, Norwegian Chamber orchestra and Umeå Symphony Orchestra.

Devoted to chamber music, Malin is a founding member of the Kungsbacka Piano Trio who were selected as both BBC New Generation Artists and European Concert Halls Organization’s ‘Rising Stars’. As a result the trio made its Carnegie Hall debut and appeared at major venues throughout Europe including the Concertgebouw, Vienna Konzerthaus, Cologne Philharmonie, Berlin Philharmonie, Schleswig-Holstein and Schwetzinger Festspiele, with residencies at Lofoten and Mecklenburg-Vorpommern Festivals as well as tours of Argentina, Uruguay, Australia, New Zealand & Canada. In 2001, she founded the Kungsbacka Chamber Music Festival now known as Change Music Festival.

From 2004-2010, she was a member of the Nash Ensemble and made her debut at the BBC Proms. The ensemble toured extensively and enjoyed a residency at London's Wigmore Hall. Together they made many recordings for Hyperion and Wigmore Live, amongst others, and broadcast regularly on BBC Radio 3.

As a violist, she also collaborates regularly with the Elias String Quartet. As part of their Beethoven cycle they recorded the quintet for Wigmore live-label. Their BBC recording of quintets by Mendelssohn and Mozart was chosen as Disc of the Month for BBC Music Magazine.

Most recently, she co-founded the Stockholm Syndrome Ensemble a group that aims to redefine the concert experience and is made up of some of Europe's most brilliant chamber musicians. The ensemble has its own series at 'Musikaliska' in Stockholm and in 2014 a documentary was made of the group for Swedish Television SVT.