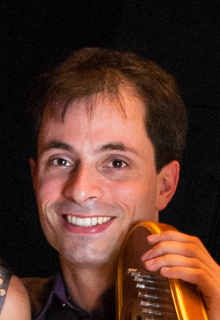 Praised by the press as “a magician” (New York’s WQXR), of “unheard of depth of colors, range of expression and rhetorical flow” (American Record Guide), Sivan Magen is the only Israeli to have ever won the International Harp Contest in Israel, a recent winner of the Pro Musicis International Award and the 2012 Award Winner of the Borletti-Buitoni Trust. Recent performances include recitals in NY (Merkin hall, Carnegie’s Weill Hall), London (Wigmore Hall), Amsterdam (Musiekgebouw) and solo appearances in the US, South America, Europe and Israel including the world premiere of Haim Permont's "Aviv" concerto with the Israel Philharmonic. Debut performances for the 2013-14 season will include concerto appearances with the Scottish Chamber Orchestra, the Sydney Symphony, and the Vienna Chamber Orchestra at the Vienna Konzerthaus. He has also been invited by Carnegie Hall to return for a recital in fall 2014, to celebrate the American release of his new solo CD for Linn records, Fantasien. This recital will also include the world premiere of the Carnegie Hall commissioned Fantasy for solo harp by emerging American composer Sean Shepherd.

An avid chamber musician, Mr Magen has appeared throughout Europe, Israel and the US (including Salle Gaveau in Paris, Alice Tully Hall, Town Hall and the Metropolitan Museum in NY, the Gardner Museum and Jordan Hall in Boston, the Kimmel Center in Philadelphia), at the Marlboro, Kuhmo, Giverny, and Jerusalem International Chamber Music festivals, and with Musicians from Marlboro. He is a founding member of the award winning Israeli Chamber Project and of Trio Tre Voci with flutist Marina Piccinini and violist Kim Kashkashian, and has collaborated with artists such as Nobuko Imai, Tatjana Masurenko, Shmuel Ashkenazi, Gary Hoffman, Michel Letiec, Charles Neidich, Emmanuel Pahud, and members of the Guarneri Quartet.

This past season were released to great critical acclaim his new CD with the Israeli Chamber Project for Azica Records as well as an all-Britten CD Still Falls the Rain with tenor Nicholas Phan for Avie (listed in the  NY Times’ “Best recordings of 2012”). Next season will be released his second solo CD for Linn Records as well as a recording with Tre Voci for ECM. His performance of Ravel’s Introduction and Allegro is featured on Marlboro’s 60th Anniversary CD.