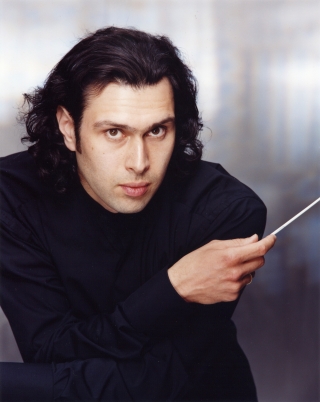 One of today’s most sought-after conductors, acclaimed worldwide for his incisive musicianship and adventurous artistic commitment, Vladimir Jurowski was born in Moscow in 1972, and completed the first part of his musical studies at the Music College of the Moscow Conservatory. In 1990 he relocated with his family to Germany, continuing his studies at the Musikhochschule of Dresden and Berlin, studying conducting with Rolf Reuter and vocal coaching with Semion Skigin. In 1995 he made his international debut at the Wexford Festival conducting Rimsky-Korsakov’s May Night, and the same year saw his debut at the Royal Opera House Covent Garden with Nabucco.

Vladimir Jurowski enjoys close relationships with some of the world’s most distinguished artistic institutions. He works annually with the Chamber Orchestra of Europe, and appears regularly with the London Philharmonic at festivals including the BBC Proms, the George Enescu Festival of Bucharest, Musikfest Berlin, and the Schleswig Holstein and Rostropovich Festivals. He enjoys regular collaborations with many of the world's leading orchestras in both Europe and North America, including the Royal Concertgebouw Orchestra, the Staatskapelle Dresden, the Cleveland and Philadelphia Orchestras, New York Philharmonic, Chicago and Boston Symphonies, the Gewandhausorchester Leipzig and the Accademia Nazionale di Santa Cecilia, and has also conducted the Berlin and Vienna Philharmonic Orchestras, and the Tonhalle Orchester Zurich.

Recent highlights include performances of Boris Godunov, uniting the Orchestra of the Age of Enlightenment with the orchestra of the Mikhailovsky Theatre in St Petersburg, appearances with the Mahler Chamber Orchestra at the Lucerne Festival and an unique project with the London Sinfonietta in Moscow to celebrate the Anglo-Russian Year of Cultural Exchange. With the State Academic Symphony of Russia he has developed a highly individual and celebrated profile in Moscow with a strong focus on contemporary repertoire, and curated projects, most recently a series of concerts exploring music from the 1930s and 1940s across all sides of the European political and wartime spectrum.

Highlights of the 2015/16 season and beyond include his return visits to the New York Philharmonic, Boston Symphony, Cleveland, Royal Concertgebouw and Philadelphia Orchestras, his debut at the Salzburg Easter Festival at the helm of the Staatskapelle Dresden, and performances at the Vienna Musikverein and Konzerthaus with the Vienna Symphony Orchestra. He will tour with the State Academic Symphony to major European capitals and summer festivals, and among the highlights of his work with the London Philharmonic he will lead performances of Das Rheingold, Mahler’s Seventh and Eighth symphonies and the world premiere of Alexander Raskatov’s Green Mass, and bring the orchestra to the Moscow Rostropovich Festival.

A committed operatic conductor, Jurowski made his debut at the Metropolitan Opera New York in 1999 with Rigoletto, and has since returned for Jenufa, The Queen of Spades, Hansel und Gretel and Die Frau ohne Schatten. He has conducted Parsifal and Wozzeck at the Welsh National Opera, War and Peace at the Opera National de Paris, Eugene Onegin at Teatro alla Scala Milan, Ruslan and Ludmila at the Bolshoi Theatre, Salome with the State Academic Symphony of Russia, and Iolanta and Der Teufel von Loudon at the Semperoper Dresden, as well as Die Zauberflöte, La Cenerentola, Otello, Macbeth, Falstaff, Tristan und Isolde, Die Meistersinger von Nurnberg, Don Giovanni, The Rake’s Progress, The Cunning Little Vixen, Ariadne auf Naxos and Peter Eötvös’ Love and Other Demons at Glyndebourne Opera. In 2015 he returned to the Komische Oper Berlin for a universally-acclaimed new production of Moses und Aron at the Komische Oper Berlin, and future operatic highlights include his debut at the Bayerische Staatsoper in Munich with Prokofiev’s The Fiery Angel, his Salzburg Festival debut with Wozzeck, and his first return to Glyndebourne as a guest conductor, to lead the world premiere production of Brett Dean’s Hamlet.

Jurowski’s discography with the London Philharmonic Orchestra includes the complete symphonies of Brahms, Mahler’s First and Second Symphonies, Rachmaninov’s Symphonic Dances, Tchaikovsky’s Symphonies 1, 4, 5, 6 and Manfred, and works by Turnage, Holst, Britten, Vaughan Williams, Shostakovich, Honegger and Haydn. Most recent releases have included Zemlinsky’s A Florentine Tragedy, and an album of orchestral works by the Orchestra's Composer in Residence, Julian Anderson. He has also recorded Schnittke’s Third Symphony with the Rundfunk-Sinfonieorchester Berlin, and a series of Russian works with the Russian National Orchestra for PentaTone Records, works by Mendelssohn and Mahler with the Orchestra of the Age of Enlightenment, and wide-ranging repertoire from Meyerbeer to Kancheli. His tenure as Music Director at Glyndebourne has been documented in numerous CD and DVD releases including award-winning productions of Tristan und Isolde, Die Meistersinger von Nurnberg, Ariadne auf Naxos, Falstaff, La Cenerentola, Rachmaninov’s The Miserly Knight and Prokofiev’s Betrothal in a Monastery.

Other DVD releases include Hansel und Gretel from the Metropolitan Opera New York, his first concert as London Philharmonic Orchestra’s principal conductor featuring works by Wagner, Berg and Mahler, and DVDs with the Orchestra of the Age of Enlightenment (Beethoven symphonies 4 and 7) and the Chamber Orchestra of Europe (Strauss and Ravel), all released by Medici Arts.