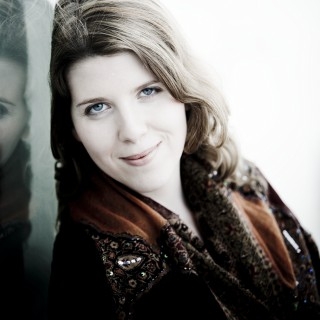 Then on came Polina Leschenko with some of the most poetic and devastatingly beautiful piano playing I have heard in an account of Chopin’s Second Piano Concerto that had ‘masterpiece’ stamped all over it. The playing by pianist and orchestra in the gorgeous slow movement stopped time; and my heart. What a night. (with Joseph Swensen and the Scottish Chamber Orchestra) The Herald, 14 February 2010, Michael Tumelty Russian pianist Polina Leschenko works with orchestras around the world including the Hallé, London Mozart Players, Scottish Chamber, Bournemouth Symphony, Britten Sinfonia, Camerata Salzburg, Bern Symphony, Lausanne Chamber, Russian National, I Pomeriggi Musicali in Milan, Gulbenkian, Orquesta de Euskadi and Australian Chamber Orchestras. A regular visitor to the Hallé, she performed in their 150th birthday celebration concert in February 2008, and in September 2008 she toured South America with the orchestra and Sir Mark Elder. An accomplished and admired chamber musician, Polina Leschenko also performs frequently at many festivals including Aldeburgh, Cheltenham, Risor, Stavanger, Istanbul, Sintra, Enescu Festival in Bucharest, La Roque d’Anthéron, International Chamber Music Festival in Utrecht, Salzburger Festspiele, Musiktage Mondsee, Schubertiade, Gstaad, Verbier, and the Progetto Martha Argerich in Lugano. Regular collaborators include Martha Argerich, Patricia Kopatchinskaja, Ivry Gitlis, Julian Rachlin, Maxim Rysanov, Heinrich Schiff, Mischa Maisky and Torleif Thedéen. Leschenko has performed in the Auditorio Nacional de Musica in Madrid, Köln Philharmonie, Wigmore hall, Cité de la Musique, Palais des Beaux Arts, Tonhalle in Zürich, Victoria Hall in Geneva, Vienna’s Konzerthaus, Amsterdam’s Concertgebouw, Lincoln Centre and Carnegie Hall.
The 2011/2012 season sees Leschenko giving solo recitals throughout Europe including at the Mozarteum in Salzburg, performing chamber music at many venues and festivals, touring and recording with the Australian Chamber Orchestra and Richard Tognetti, and working with the Hallé Orchestra.
In 2009 Leschenko began a new position as International Chair in Piano at the Royal Welsh College of Music & Drama in Cardiff, where she has a three-year residency.
In 2003 Polina Leschenko recorded a début CD for EMI in the series ‘Martha Argerich presents …’ with works by Liszt, Chopin, Kreisler/Rachmaninov, Brahms and Bach/Feinberg. Gramophone described her as having ‘technical dexterity in abundance, and signs of a major artist in the making’. She has also recorded a well-received disc of Prokofiev chamber music with Martha Argerich, Christian Poltéra and Roby Lakatos, for Avanticlassic, with whom she has a recording contract. Her recital disc – featuring an all-Liszt programme including the B minor Sonata – was released in May 2007 by Avanticlassic. La Libre Belgique wrote, ‘Polina Leschenko has matured without having lost any of her freedom. Now even more inspired, she turns her wonderful talents to a brilliant, almost improvisatory reading of the Liszt repertoire. Beautifully acknowledging Bach, Busoni and Gounod’s Liszt transcriptions in the first half of the disc, she then offers a unique and personal version of the Sonata: a visionary reading full of lucidity’. The disc has won several awards: a Choc du Monde de la Musique, Pizzicato magazine’s Supersonic and a Joker from Belgian magazine Crescendo. Recently released by EMI Classics was a recording of Glinka’s Sextet as part of the ‘Martha Argerich and Friends Live from the Lugano Festival’ series, from 2009.
Polina Leschenko was born in St Petersburg into a family of musicians, and began playing the piano under her father’s guidance at the age of six. Two years later she made her solo début with the Leningrad Symphony Orchestra in St Petersburg. She studied with Sergei Leschenko, Vitali Margulis, Pavel Gililov, Alexandre Rabinovitch-Barakovsky and Christopher Elton.